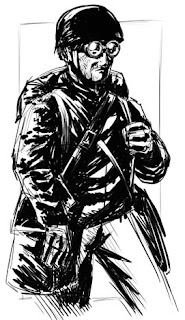 Here's the first sketch for the main character of 'Code: Humans'. For now it's a short 4-issues mini-series, and thus far 2 issues are completely written and with their own story boards.

The story tells about a futuristic and decayed humanity, who suffers an alien attack leaving just a few humans alive on earth.

That's for now, I won't be revealing a lot until the work is more advanced, but I can tell that this isn't a typical 'alien invasion story'.