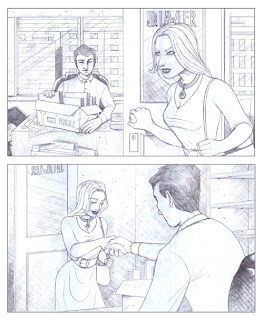 Here's a test I've done for a publisher. Two panels that describe the script they gave me.

For this work I've used a more clean style than my usual work, and this will give a simpler job for the inker and a great chance for the colorist to create volumes and lights with the color.

I can use this style also for superheroic comics, but anyway I'll be uploading more of that specific genre soon.
en 11:25 PM No comments: 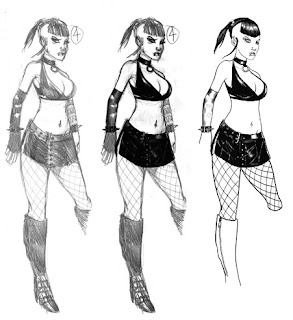 Here's the same character from the previous post, now I'm using the same image to explain the process of digital inking that I've done, just like an experiment.

First I've done a really rough drawing of the character. I didn't detail a lot her face nor the clothes. Once the image is in the computer, I've used my Wacom tablet and Photoshop to start the inking.

The pro is that you'll be able to add lots of details. The only negative thing that I've found is that maybe it'll take more time than the common inking.

I'm still using markers for the inking, but I think I'll be considering the digital inking in the future.
en 11:43 PM No comments: 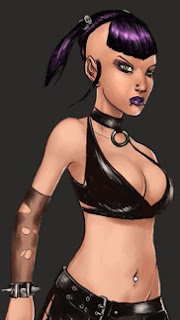 Here's an image from one of the characters in my story "Angels & Demons". I got this project aside at the moment, but as soon as can I'll be sketching all the pages and re-writing the script.

The story is about the internal struggle of a man in his way towards knowing himself, and in the search of his truth.
en 11:35 PM No comments: